Fostering Emunah in our Children – A Pesach Message

by Rabbi Shaya Baumann of Torah Academy of Boca Raton

My baby boy? A bar mitzvah! 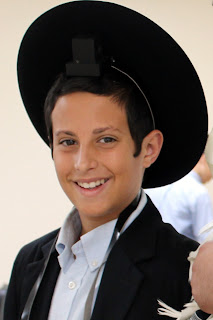 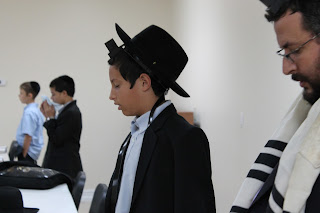 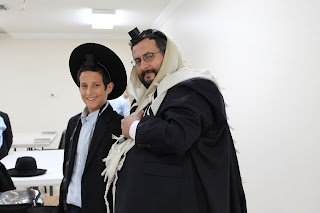 Things sometimes appear to get a little lost in the telling of the parsha in school. Ada love to share everything she's learned in great detail. It took us a little bit to figure out some details in Bereishit like when Hashem blew a soul into Adam she declared, "Hashem glued a neshama into Adam." Or her description of the story centering around the "fake tree" which was determined to be a misrepresented fig tree!

Sometimes, though, I don't want to correct some errors because they sound so cute. Like when she says sepretary instead of secretary. Or when she urges her sister to hurry up by saying, "C'mon! Pick up the paste!" Nothing stops that girl from experimenting with new "fancy" words every day. Love it.
Posted by Ayelet at 11:03 PM No comments:

An older lady - a friend of Dovid's grandmother - complimented Mordechai on how handsome he was. She went on to say how important sons were. After all, she said, they carry on the name.

My son thoughtfully mused, "What's more important, the name or the religion?"
Posted by Ayelet at 11:08 PM No comments:

Ada had a supply of potato sticks from the tearoom in a foam cup. Unfortunately, most of them accidentally spilled out onto the floor. After she collected them up, she announced that she would throw them out and replace them with a fresh supply. She began to pour out the potato sticks into a nearby trash can.

Me: Why don't you just throw out the whole cup and get a new one?

Ada: I'm trying to save the environment!
Posted by Ayelet at 11:12 PM No comments:

All we knead is pizza dough!

Posted by Ayelet at 4:08 PM No comments:

Ada's been having fun on the computer lately making collages in Publisher and lists of things (that we already have lists for) like her class list in Excel.  She's getting lots of great skills. Tonight she came and asked me how to make another "list." I was about to tell her how to open a new spreadsheet when she said, "Oh, I remember!"I raised my eyebrow in surprise. "Really," she said. "You go to start and then Micro-office and then click on elexus, right?" Sounds good to me!

Doing Hebrew reading homework has also become more fun because she has real words rather than nonsense syllables ( which were torture for both of us!). She has a good time recognizing all the words she's seen or heard in other places like davening or chumash. Sometimes we get some amusing ones like: עשיר . What's amusing about that? Well I was looking for אֵיזֶהוּ עָשִׁיר? - הַשָמֵחַ בְּחֶלְקוֹ . She said - no! It's like "a shiur."
Posted by Ayelet at 8:27 PM No comments:

Want me to keep you posted?